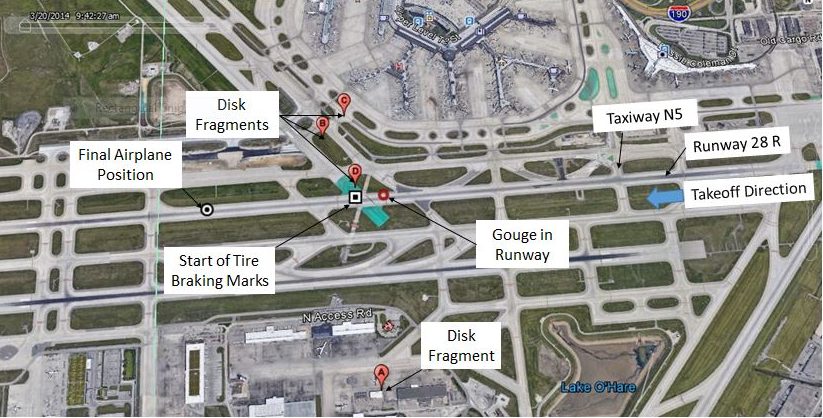 The stage 2 high pressure turbine disk of an American Airlines GE CF6-80C2B6 engine that suffered an uncontained failure during takeoff Oct. 28 fractured into at least four pieces, the U.S. National Transportation Safety Board (NTSB) said Nov. 4. One piece of the disk traveled through the inboard section of the right wing of the Boeing 767-300, over the fuselage an into a UPS warehouse facility, NTSB said in an investigative update. (See photo above for locations where disk fragments were found.) Aviation Safety Network reported that the distance the fragment traveled was 900 m.

According to information gathered by NTSB, American Airlines Flight 383 started its takeoff roll at Chicago O’Hare on runway 28R at the intersection of taxiway N5. The airplanes experienced an uncontained failure of the right engine about 6,550 feet from the runway threshold and came to a full stop about 2,675 feet later. Preliminary flight data recorder data show the failure occurred at an airspeed of 128 knots with the engine operating at takeoff power. As a result of the uncontained failure, a fuel leak resulted in a pool fire under the right wing. After the aircraft came to a stop, an emergency evacuation of the 161 passengers and nine crewmembers was conducted.

The majority of the stage 2 disk was recovered and sent to the NTSB laboratory in Washington for examination. “One of the fractures exhibited features consistent with fatigue cracking initiating at an internal inclusion near the forward side of the hub’s inner bore,” NTSB said. The disk had 10,984 cycles and a life limit of 15,000 cycles. “Ongoing metallurgical examinations of the disk will focus on detailed characterization of the inclusion and the fracture surfaces,” NTSB said.