Unruly Passenger Incidents on the Rise 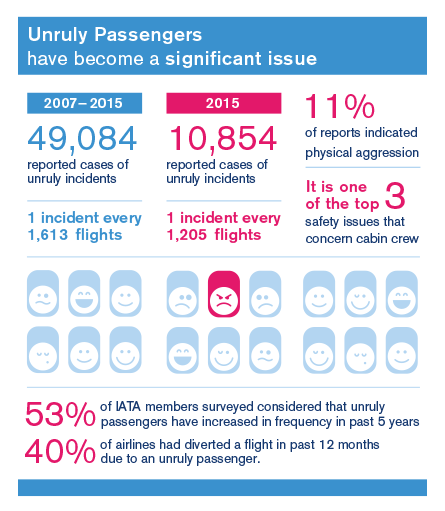 Reports of unruly passenger incidents on commercial aircraft increased 16.5 percent last year from 2014, according to data released by the International Air Transport Association (IATA). The data were based on reports from IATA member carriers.

“The anti-social behavior of a tiny minority of customers can have unpleasant consequences for the safety and comfort of all on board,” IATA Director General and CEO Alexandre de Juniac said in calling on more states to ratify the Montreal Protocol 2014 amendment to the Tokyo Convention. The Montreal Protocol gives states a “more robust framework” for dealing with unruly passengers by giving authorities the “means to take appropriate action against perpetrators for their misconduct,” according to a working paper IATA submitted for discussion during the International Civil Aviation Organization’s recently completed 39th Assembly.

Six countries have ratified the Montreal Protocol 2014 to date. “More are needed in order to have a consistent global approach to this issue,” said de Juniac. “Airlines and airports are guided by core principles developed in 2014 to help prevent and manage [unruly passenger incidences]. But we cannot do it alone. That’s why we are encouraging more governments to ratify” the protocol, he said.