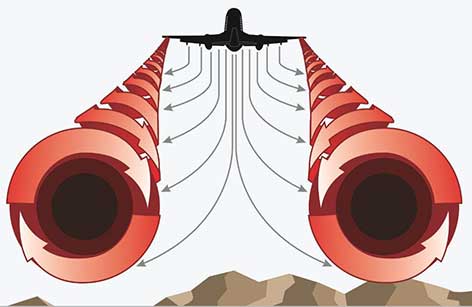 Wake turbulence occurrences are being reported at a disproportionate rate by crews flying into Sydney Airport — the only major airport in Australia with parallel runways, according to a study released Friday by the Australian Transport Safety Bureau (ATSB).

The study found that 179 wake turbulence occurrences were reported to the ATSB between 2012 and 2016, with 78 (44 percent) occurring at Sydney Airport. The 179 occurrences resulted in eight minor injuries, with seven of the eight at Sydney.

The ATSB report, Analysis of Wake Turbulence Occurrences at Sydney Airport, 2012–2016, said that more than half of the wake turbulence occurrences at Sydney were associated with at least one of the following factors: “high arrival densities across the parallel runway; wind blowing across the parallel runways from the longer to the shorter runway, especially when a heavy or super heavy aircraft was arriving on [the] longer runway; and arrivals following an Airbus A380.”

The distance between Sydney’s parallel runway is great enough that they are “treated as individual runways and do not require the application of the wake turbulence separation standard for aircraft operating to a single runway,” the ATSB said.

Researchers found that the likelihood of encountering wake turbulence increased substantially when the time between arriving aircraft was less than one minute, the report said, adding that aircraft approaching Runway 34R were more likely to be affected than those approaching the longer Runway 34L.

Aircraft arriving on Runway 34L were “the most likely cause for more than half of the Runway 34R … arrival wake turbulence occurrences,” the report said. “A leading Airbus A380 (a super heavy aircraft) probably generated more than one-third of these occurrences.”

As a result of the investigation, Airservices Australia planned to publish an aeronautical information circular to advise the industry of the injuries associated with wake turbulence on Runway 34R and to recommend that the cabin crew be seated with safety belts fastened earlier in the approach.

The ATSB also issued a safety recommendation calling on Airservices Australia to act to reduce the frequency of wake turbulence occurrences at Sydney.

Airservices also said it would increase separation distances to 5 nm (9 km) from 4 nm (7 km) for aircraft arriving on Runways 16L/R and 34L/R and would apply the single-runway wake turbulence standard to the parallel runways “when the leading aircraft is a super heavy like an A380 and the following aircraft is light (under 25,000 kg [55,115 lb]).

The ATSB asked Airservices to consider undertaking an analysis of landing information “to explore other options that could further reduce the risk of wake turbulence.”

The International Air Transport Association (IATA) has begun a program designed for real-time sharing of turbulence data among participating airlines. Under the Turbulence Aware program, data will be collected from…

The International Air Transport Association (IATA) is developing the framework for a turbulence information sharing platform that it hopes to launch in 2019, IATA said Tuesday. In a briefing prepared…

The pilots told accident investigators how they lost control of the aircraft in a wake turbulence encounter that caused the CL604 to drop 9,000 ft and roll through “several rotations.”