Between Rocks and a Wet Place

An EMS crew chose to ditch, rather than risk flaming out during another approach to a remote island airport. 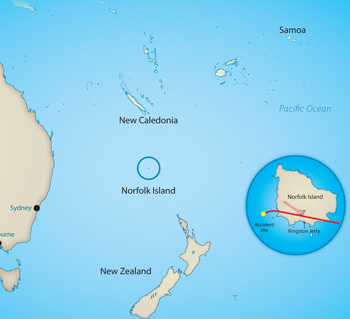 Incomplete preflight and en route planning by the flight crew of an emergency medical services (EMS) aircraft, and the crew’s late recognition of the slim chances for a safe landing on a small South Pacific island, forced a tough decision: to attempt another approach in darkness and deteriorating weather conditions — and risk a flameout over hostile terrain — or to ditch the aircraft with power before the fuel tanks ran dry, said the Australian Transport Safety Bureau (ATSB).

The crew of the Israel Aircraft Industries Westwind 1124A chose the latter. Unable to see the ocean surface, they used their radar altimeter to time the flare. All six occupants survived the hard impact with the sea and were able to escape from the partially submerged aircraft before it sank. Their survival of the Nov. 18, 2009, ditching was facilitated by the underwater-escape training that they had received, said the ATSB in a final report released in August.

The accident occurred at Norfolk Island, a planned refueling and rest stop for an EMS trip from Sydney, Australia, to Apia, Samoa, and back to Melbourne, Australia. The island, a self-governing territory of Australia, is about 1,420 km (767 nm) off the east coast of Australia and about 3,000 km (1,620 nm) southwest of Samoa.

The aircraft was ditched on the return flight to the island, after the pilots, a physician and a flight nurse had flown to Samoa, taken an eight-hour rest break and boarded a patient and a passenger.

Before the late-afternoon departure from Samoa, the pilot-in-command (PIC), who had 3,596 flight hours, including 923 hours in the Westwind, telephoned Airservices Australia to file a flight plan and to receive a weather briefing. The forecast for Norfolk Island called for visibilities greater than 10 km (16 mi), scattered clouds at 2,000 ft and light southwesterly winds. The briefing officer also told the PIC that the ceiling was expected to become 2,000 ft broken a few hours after the estimated time of arrival.

“The PIC did not obtain any other en route or terminal meteorological information, notices to airmen (NOTAMs) or additional briefing information from the briefing officer, such as the availability of facilities at any potential alternate aerodromes,” the report said.

The Westwind’s main tanks were topped, but no fuel was added to the tip tanks for the flight to Norfolk Island. Investigators estimated that the aircraft departed from Samoa with 7,330 lb (3,325 kg) of fuel; maximum fuel capacity is 8,870 lb (4,023 kg).

The copilot was the pilot flying; she had 1,954 flight hours, including 649 hours in type. As the aircraft neared the planned cruising altitude of Flight Level (FL) 350 (approximately 35,000 ft), air traffic control (ATC) told the crew that they would have to descend to FL 270 due to crossing traffic. Concerned with the increased fuel consumption at the lower cruise altitude, the PIC requested and received clearance to climb to FL 390 instead.

“The PIC reported that, once established at FL 390, he reviewed the fuel required for the remainder of the flight against the fuel remaining in the aircraft,” the report said. “He recalled that the 80-kt headwind experienced thus far was greater than expected” and extended the estimated time of arrival at Norfolk Island by 30 minutes.

“The flight crew reported calculating that, due to the increased headwind, the flight could not be completed with the required fuel reserves intact and that they adjusted the engine thrust setting to achieve a more efficient, but slower, cruise speed. The flight crew recalled satisfying themselves that the revised engine thrust setting would allow the aircraft to complete the flight with the required fuel reserves intact.”

About two-and-a-half hours into the flight, the PIC asked ATC for the current weather conditions at the destination. The controller said that a special report had just been issued, indicating that visibility was greater than 10 km and that the ceiling was overcast at 1,100 ft. “These conditions were less than the alternate minima for Norfolk Island Airport but above the landing minima,” the report said. “The PIC acknowledged receipt of that weather report but did not enquire as to the availability of an amended TAF [terminal area forecast] for the island.”

The pilots told investigators that initially they did not recognize the significance of the lower-than-forecast weather conditions on the island. “They advised that if either had realised that significance, they would have initiated planning in case of the need for an en route diversion,” the report said.

A special report issued about an hour later got the crew’s attention. The reported visibility was 7,000 m (4.4 mi), and the clouds were scattered at 500 ft, broken at 1,100 ft and overcast at 1,500 ft. Although the weather conditions had deteriorated, they were still above landing minimums. And, uncertain that the aircraft had enough fuel to divert to the nearest suitable alternate — Nouméa, New Caledonia — the crew decided to continue to Norfolk Island.

The crew had planned to conduct the VHF omnidirectional range (VOR) approach to Runway 29, which had a minimum descent altitude (MDA) of 484 ft and required 3,800 m (2.4 mi) visibility. (The airport had “special category” area navigation approaches that provided lower minimums, but the Westwind had not been approved for such approaches.)

“The crew reported agreeing that the expected weather would mean that visual reference with the runway [might] be difficult to obtain and that the PIC would closely monitor the approach by the copilot,” the report said. “During the briefing for the first approach, the crew agreed that if visual reference with the runway was not obtained, the PIC would take over control of the aircraft for any subsequent approaches.”

Recorded radio transmissions indicated that the crew conducted a missed approach at 1004 coordinated universal time (UTC; 2134 local time). As planned, the PIC assumed control of the aircraft, which had about 1,300 lb (590 kg) of fuel remaining. He decided to conduct the VOR approach to Runway 11, which had a lower MDA of 429 ft and required 3,000 m (1.9 mi) visibility, although there would be a 10-kt tailwind.

The second approach also resulted in a go-around. “At this time, the flight crew decided that they would ditch the aircraft in the sea before the fuel was exhausted,” the report said.

The copilot briefed the medical crew and the passenger for the ditching, and told the Unicom operator, “We’re going to have to ditch. We have no fuel.”

The aircraft was equipped with two life rafts and enough life jackets for all the occupants. The physician, flight nurse and passenger donned life jackets, and the two life rafts were removed from their storage compartments and placed in the aisle. “The flight crew recalled having insufficient time to put on their life jackets between deciding to ditch and the ditching,” the report said.

The physician decided not to put a life jacket on the stretcher-bound patient, because it might hinder the release of her restraints after the ditching. “The doctor ensured that the patient’s harness straps were secure and instructed the patient to cross her arms in front of her body for the ditching,” the report said.

During the second missed approach, the pilots decided that ditching the aircraft to the southeast would risk a collision with a nearby island. “The flight crew decided to conduct one more instrument approach for Runway 29 as, if they did not become visual off that approach, the missed approach procedure track of 273 degrees would take the aircraft to the west of Norfolk Island, over open sea and clear of any obstacles for the planned ditching,” the report said.

The PIC said that he purposely descended below the MDA on the third approach, in an unsuccessful attempt to establish visual contact with the runway. At 1025 UTC (2155 local), the copilot told the Unicom operator that they were “going to proceed with the ditching.” A subsequent radio transmission from the aircraft was unintelligible.

The crew conducted a climb to 1,200 ft, turned west toward the sea and initiated a descent while monitoring radio altitude. The PIC initiated a flare at 40 ft. “The flight crew recalled that, although they had selected the landing lights on, they did not see the sea before impacting the water” at about 100 kt with the landing gear retracted, the report said. “The occupants recalled two or three large impacts when the aircraft contacted the water” about 5 km (3 nm) from shore.

The flight nurse and the copilot were seriously injured on impact; the passenger, the patient, the physician and the PIC sustained minor or no injuries. Water entered rapidly through a tear in the fuselage, and the plug-type cabin door could not be opened fully.

The PIC ensured that the copilot, who had been dazed when her head struck the control yoke, was responsive before he left the cockpit. Finding that the cabin door was not usable, he opened the left emergency exit and escaped through it.

The physician released the patient’s restraints and opened the right emergency exit. “The nurse, doctor and patient exited the aircraft through the starboard emergency exit,” the report said. “All three reported holding onto each other as they departed ‘in a train.’”

The flight crew and medical crew told investigators that the ditching training they had received had assisted their escape from the aircraft, which sank in 48 m (157 ft) of water and was not recovered. The pilots had taken “wet-drill training” that included practice in ditching procedures and escape from a ditched aircraft; the physician and flight nurse, who frequently flew in EMS helicopters, had taken helicopter underwater escape training, which “exposes trainees to simulated helicopter ditching and controlled underwater escape exercises, [including] simulated dark conditions and with simulated failed or obstructed exits,” the report said.

The aircraft’s 406 MHz emergency locator transmitter (ELT) had activated automatically on impact. However, only one distress signal was received by Australian Search and Rescue, which “was able to identify the owner of the ELT but was not able to assess its location from the one transmission,” the report said.

Nevertheless, a firefighter en route along the west coast of the island to Kingston Jetty considered the possibility that the aircraft had been ditched to the west. He stopped on the western cliffs and saw the faint glow of the torch (flashlight) that the PIC was shining toward the shore. The firefighter passed the information to the Emergency Operations Centre, and it was relayed to the crew of a marine vessel, which turned toward the sighting and made the rescue.

ATSB concluded that the accident occurred in part because “the flight crew’s delayed awareness of the deteriorating weather at Norfolk Island combined with incomplete flight planning to influence the decision to continue to the island, rather than divert to a suitable alternate.”

The report noted that the Australian Civil Aviation Safety Authority is developing new regulations regarding preflight and in-flight fuel planning, selection of alternate airports and operations with extended diversion times.