Caught in a Trap

The NTSB says the lack of a cockpit alert light led to the crash of an AS350 B3e. 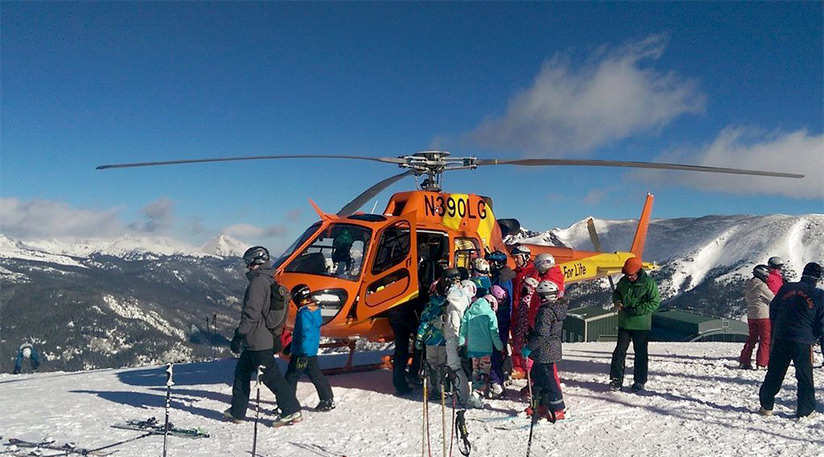 An Air Methods Airbus Helicopters AS350 B3e crashed on takeoff from a Colorado hospital’s heliport because the pilot was unaware that pressure in the tail rotor’s hydraulic circuit had been depleted during a preflight check, the U.S. National Transportation Safety Board (NTSB) says.

The preflight hydraulic check itself, as well as the “lack of salient alerting to the pilot that hydraulic pressure was not restored before takeoff,” were cited by the NTSB as the probable causes of the July 3, 2015, accident, which killed the pilot and seriously injured the two flight nurses.

“Such alerting might have cued the pilot to his failure to reset the yaw servo hydraulic switch to its correct position during the preflight hydraulic check, which resulted in a lack of hydraulic boost to the pedal controls, high pedal forces and a subsequent loss of control after takeoff,” the NTSB said in its final report on the accident, issued in late March.

Contributing to the accident were the pilot’s “failure to perform a hover check after liftoff, which would have alerted him to the pedal control anomaly at an altitude that could have allowed him to safely land the helicopter,” the report said.

The helicopter’s fuel system, which was not crash-resistant and therefore “facilitated a fuel-fed post-crash fire,” contributed to the severity of the nurses’ injuries, the report said.

In a concurring statement included in the report, Acting NTSB Chairman Robert Sumwalt said that although the pilot had made an error in not resetting the switch to “ON,” he had not made the error “in a vacuum.”

Sumwalt added, in a statement also signed by NTSB members Christopher Hart and Earl Weener, “The system set a trap: If hydraulic pressure was lost … through means other than the preflight test procedure, an alert light would illuminate on a cockpit display; if tail rotor hydraulic pressure was deliberately depleted as part of the preflight check, however, no such salient alerting would be provided to the pilot.”

Plans were for the helicopter to participate in a public relations activity after flying to Gypsum Colorado, about 40 nm (74 km) from the Summit Medical Center Heliport. Surveillance video at the medical center showed the pilot beginning a preflight check of the helicopter around 1331 local time. The helicopter lifted off at 1339 and, 32 seconds later, crashed 360 feet away into a hospital parking lot. The helicopter was destroyed by the impact and a post-crash fire.

One of the flight nurses later told accident investigators that the takeoff had been “rough, with some unusual pitch” and that the helicopter began a counterclockwise turn that “sort of paused momentarily” before continuing in a climbing turn. The report quoted the flight nurse as saying that, after a 360-degree turn, the pilot appeared to “attempt to gain some forward airspeed,” but then the helicopter “violently began spinning counterclockwise.”

The report added, “He recalled that the pilot was ‘preoccupied with trying to maintain control of the aircraft’ as the helicopter descended and impacted the ground.”

Air Methods’ chief pilot told accident investigators that the pilot’s colleagues gave “rave reviews” of his flying ability and said that “everyone always felt safe with him.”

The pilot had been off duty for about a week before reporting to work at 0735 the day of the accident. His wife told investigators that he appeared well-rested and happy, and that there had been nothing unusual about his scheduled duty day; he had worked the same schedule for 27 years, she said.

Air Methods, which was established in 1980 as a specialist in emergency medical services operations, has 300 bases in 48 of the 50 U.S. states. It maintains a fleet of 450 aircraft, primarily Airbus and Bell helicopters, and at the time of the accident, it employed 1,293 helicopter pilots.

The company had a safety program in place at the time of the accident, and its safety management system — implemented in 2009 — had achieved the top level of compliance, the NTSB report said. Although accident investigators were unable to determine why the accident pilot had not completed the yaw servo hydraulic check or performed a hover check before the accident, they found no indication that the company’s organizational culture influenced his actions, the report said.

The accident helicopter was manufactured in March 2013 and had accumulated 487 flight hours. It was maintained according to an aircraft inspection program approved by the U.S. Federal Aviation Administration, with the most recent inspections performed between June 30 and July 2 [year??], 2015. After completion of the last maintenance check, the helicopter was flown about four hours before the accident flight.

The 481-hour engine was a Turbomeca Arriel 2D turboshaft with a three-blade main rotor and a two-blade tail rotor, both operating at a constant rpm.

Before flight, procedures called for the pilot to perform a hydraulic check of the yaw load compensator with the following steps:

The procedure was included in the “Starting Engines” section of an expanded checklist for AS350 B3 helicopters with dual hydraulic systems, and other Air Methods pilots told investigators that the accident pilot always used the expanded checklist. Air Methods personnel also said that training “did not include information about the helicopter’s response if the yaw servo hydraulic check was not properly completed,” the accident report said.

Takeoff procedures specified by the manufacturer and Air Methods also called for AS350 B3e pilots to lift off to a hover and check engine and mechanical control instruments, then to increase airspeed while hovering in ground effect.

The NTSB concluded that “the pilot most likely did not return the yaw servo hydraulic switch to its ‘ON’ position before takeoff, resulting in no hydraulic pressure in both the tail rotor servo control and the yaw load compensator accumulator, a lack of hydraulic boost to the pedals and significantly increased pedal loads. … Video evidence also showed that the pilot did not perform a hover check, as required by operational procedures, which could have allowed the pilot to verify the helicopter’s controllability.”

The NTSB investigated several similar events in the past, including an April 9, 2014, accident in which a PHI Air Medical AS350 B3e crashed into a helicopter rooftop, leaving the pilot and two medical technicians with minor injuries and the helicopter with substantial damage. The helicopter had just taken off from the hospital heliport on a positioning flight, and when the pilot attempted to make a slight left turn, “the helicopter kept turning,” the NTSB said in its final report on that accident.1

“The pilot attempted to apply right pedal to stop the turn but reported that the pedals felt jammed or locked in the neutral position. The helicopter began spinning to the left.”

Accident investigators found the yaw servo hydraulic switch in the “ON” position, but the report said that they could not determine its position during takeoff “because of the lack of an on-board image recorder.” The probable cause of the accident was “the pilot’s loss of yaw control during takeoff due to the absence of hydraulic boost to the tail rotor pedals for reasons that could not be determined based on the available information.”

The NTSB also cited a June 26, 2014, incident in which an Air Methods AS350 B3 took off from Draughon-Miller Central Texas Regional Airport, in Temple, Texas, and immediately yawed left. The pedals “were locked in the neutral position and felt jammed,” the NTSB said in its final report on that accident.2 The pilot told investigators that after trying — and failing —to stop the rotation, he performed a hovering autorotation. The pilot and two crewmembers were uninjured and the helicopter received minor damage.

The NTSB’s final report on that accident said that an examination of the helicopter revealed no problems with the tail rotor or hydraulic systems. The yaw servo hydraulic switch was in the “OFF” position, and the NTSB said the probable cause was “the pilot’s failure to reposition the … switch to the ‘ON’ position during the pre-takeoff hydraulic system check, which resulted in a complete lack of hydraulic boost to the tail rotor system and increased the load required to move the control pedals and led to the pilot’s subsequent inability to manipulate the control pedals and his loss of yaw control.”

In August 2014, nearly a year before the accident, Airbus Helicopters issued Safety Information Notice 2776-S-29, which warned of “a complete lack of hydraulic boost to the tail rotor system” if a pilot neglected to move the yaw servo hydraulic switch to the “ON” position after checking the system.

In February 2015, the company issued Service Bulletin (SB) AS350-67.00.64, which provided more information about test procedures and, among other things, instructed operators to add caution indicator lights to indicate the status of the two hydraulic systems. The company sold kits to allow operators to accomplish the modification.

If the SB had been implemented, the NTSB said, the accident pilot “might have noticed that the switch was not in the correct (‘ON’) position before takeoff.”

In August 2015, one month after the accident, the company issued SB AS350-67.00.66, which revised the hydraulic check procedure for AS350 B3 dual-hydraulic helicopters, including the B3e, by removing the yaw servo hydraulic check and adding a similar check to engine and rotor shutdown post-flight procedures.

If the accident helicopter had been equipped with such an alert, the NTSB report said, it “could have cued the pilot to the incorrect configuration of the tail rotor hydraulic circuit, the lack of hydraulic boost to the pedal controls and the resulting increased pedal loads.”