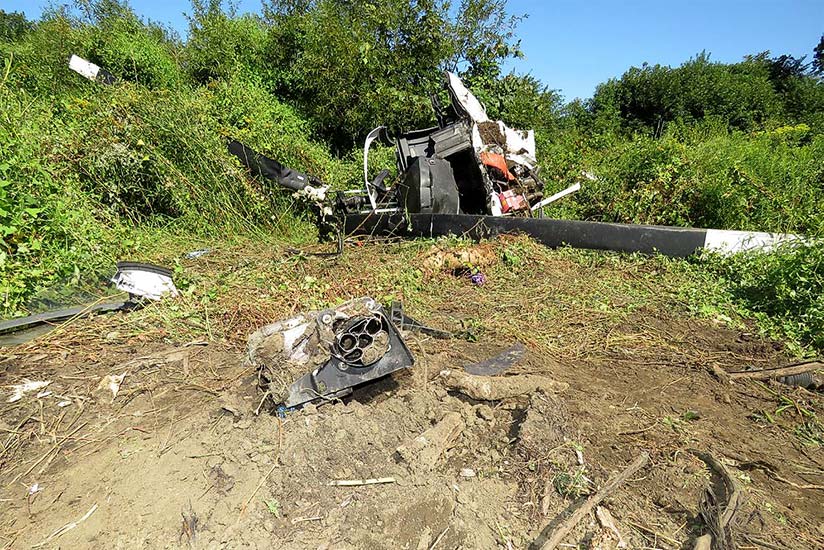 Several minutes after takeoff from Flying W Airport in Medford, New Jersey, U.S., the pilot of a sightseeing Schweizer 269C-1 radioed that he was unable to control engine rpm by advancing and retracting the throttle. He shut down the engine to conduct an autorotative landing but lost control of the helicopter, which crashed to the ground.

The Sept. 8, 2017, accident killed the pilot and his sole passenger, musician Troy Gentry, who had boarded the helicopter for an orientation flight in advance of a concert scheduled that night on the airport grounds.

The U.S. National Transportation Safety Board (NTSB) said, in its final report on the accident, that the probable cause was the pilot’s “early entry into and failure to maintain rotor rpm during a forced landing autorotation after performing an engine shutdown in flight, which resulted in an uncontrolled descent.”

The NTSB cited as a contributing factor “the failure of maintenance personnel to properly rig the throttle control tie rod assembly, which resulted in an in-flight separation of the assembly and rendered control of engine rpm impossible.”

Examination of the wreckage found evidence “consistent with the two-piece throttle control tie rod assembly having disconnected in flight,” the NTSB report said.

No Change in RPM

The accident flight began shortly before 1300 local time with departure of the helicopter — owned by Herlihy Helicopters and operated by Helicopter Flight Services — from the Flying W Airport in Medford. Several minutes later, the pilot reported on the UNICOM frequency that he could not control engine rpm. “He reported that he could ‘roll’ the twist-grip but that there was no corresponding change in engine rpm when he did so,” the report said.

Two flight instructors on the ground, as well as a U.S. Federal Aviation Administration (FAA) inspector who was also a helicopter instructor and flight examiner, discussed several options with the pilot, including conducting a run-on landing — a shallow approach maneuver, also called a running landing or roll-on landing, in which the helicopter transitions from forward flight to landing and the helicopter slides to a stop after touching down — or a power-off autorotational descent — in which the rotor blades are driven not by engine power but by the upward flow of air through the rotor.

“The instructors suggested that the pilot perform the run-on landing,” the report said. “However, the pilot reported that a previous attempt to perform a run-on landing was unsuccessful and announced that he would stop the engine and perform a power-off autorotation.” 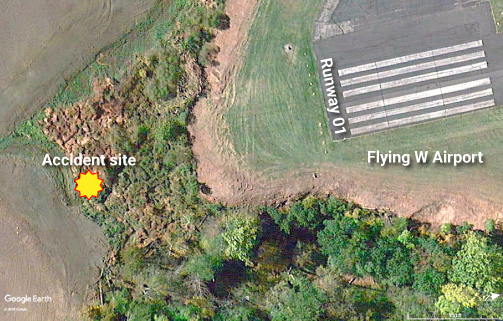 The report added that the examiner and the FAA inspector agreed that the pilot was advised several times to touch down midfield and not to begin the engine shutdown and autorotation until the helicopter was over the runway. The designated examiner said the final warning came when the helicopter was on a 2-mi (3-km) final approach.

Video showed that the autorotation appeared to begin when the helicopter was about ¼ mi (0.4 km) south of the runway, and as the video neared an end, the descent profile became more vertical and the helicopter emitted a high-pitched whine. The descent rate increased until the helicopter descended out of view.

The company flight instructor told authorities after the accident that the rotation began about 950 ft above ground level. He added, in a written statement, “It was not long before it became apparent it was not being executed correctly. I began to see individual blades instead of a translucent disc. His vertical speed increased while his horizontal speed became almost nonexistent. The nose of the (helicopter) rolled forward. Instead of being able to see the bottom of the (helicopter) … all I could see was the cockpit glass and rotor head.”

The NTSB report noted that the increased angle and rate of the descent and the slowing of the rotor blades are characteristic of a loss of rotor rpm during autorotation.

The report said that when the pilot realized that the helicopter would not reach the runway, he had two options: either land the helicopter straight ahead and touch down before the runway threshold or conduct a 180-degree turn to a field.

Instead, the report said, “he continued the approach to the runway and attempted to extend the helicopter’s glide by increasing collective pitch, an action that resulted in a decay of rotor rpm and an uncontrolled descent.”

The accident pilot held commercial and flight instructor certificates, each with a rating for rotorcraft-helicopters and instrument flight in helicopters. He had logged 481 flight hours, including 300 hours in the same make and model as the accident helicopter.

According to company records, he had received the training required for employment as a flight instructor and completed his last competency check on April 19, 2017, in the accident helicopter.

The owner of Helicopter Flight Services, operator of the accident aircraft, held airline transport pilot, commercial and flight instructor certificates with multiple ratings on each certificate, and a mechanic certificate with ratings for airframe, powerplant and inspection authorization. He performed some of the helicopter maintenance himself, including the most recent inspection of the throttle cable.

The helicopter was manufactured in 2000 and delivered to the owner/operator. Its most recent 100-hour inspection was completed Aug. 17, 2017, when it had accumulated 7,884 total aircraft hours.

Maintenance records showed that the Lycoming HO-360-C1A engine had been replaced as recommended by the manufacturer with factory rebuilt or overhauled engines in 2003, 2006 and 2011.

Records also showed repeated carburetor problems that were dealt with by adjusting or removing the carburetor and reinstalling it after repairs.

A McFarlane Aviation Products throttle control cable was installed in August 2016 with FAA approval because a cable from the original equipment manufacturer was not available. The cable was inspected every 25 flight hours and the inspections were documented, as required by the FAA; the most recent inspection was conducted 15 flight hours before the accident.

When they asked specifically about the most recent throttle rigging procedure, which followed the most recent engine change, and about the measurement of the tie rod during the procedure, he responded, “I don’t know if I did. I’m sure I did, because that’s part of the procedure, but I’m not 100 percent (sure).” Nevertheless, he emphasized that installation of the cable was “plug and play,” with no need for adjustments to maintain proper rigging of the throttle.

A post-crash laboratory examination found damage to the internally threaded rod attached to the bell crank and to the externally threaded rod-end bearing attached to the throttle control arm. The damage was “consistent with an incorrectly adjusted throttle control tie rod assembly with reduced thread engagement, which led to separation of the rod end bearing from the tie rod and resulted in loss of control of engine rpm via the throttle twist grip control,” the report said.

Three end threads of both the internally threaded and externally threaded sections were damaged in a manner that the report said was “consistent with thread-to-thread wear.” Internally, three end threads were damaged in ways consistent with “vibratory thread-to-thread wear,” the report said, adding that, “Once installed, each end of the throttle tie rod remained fixed and … unable to rotate.”

Emergency procedures outlined in the aircraft manual — the US. Army Hughes TH-55A Manual, which also applied to the Hughes/Schweizer 269 — said that in case of a throttle failure in flight, the pilot should “continue to a landing area that will permit a shallow approach and running landing.”

The manufacturer’s Pilot’s Flight Manual did not specify an emergency procedure for throttle failure, and the NTSB report said that an FAA inspector’s questions of two other manufacturers of piston helicopters found that neither included such a procedure in their flight manuals.

FAA Advisory Circular 61-140, Autorotation Training — Predominant Cause of Accidents/Incidents, said that a review of accidents and incidents that occurred during autorotation training or instruction concluded that their predominant probable cause is “failure to maintain main rotor rpm … and airspeed within the … specified range, resulting in an excessive and unrecoverable rate of descent.”

This article is based on NTSB Accident Report no. ERA17FA317 and supporting documents.

Cutting Back on Errors

SMS and FDM are among the most effective methods of assessing safety during flight, an NTSB aviation accident investigator says.

A B-300 crashed, killing 10, after the pilot failed to follow procedures for loss of engine power, the NTSB says.