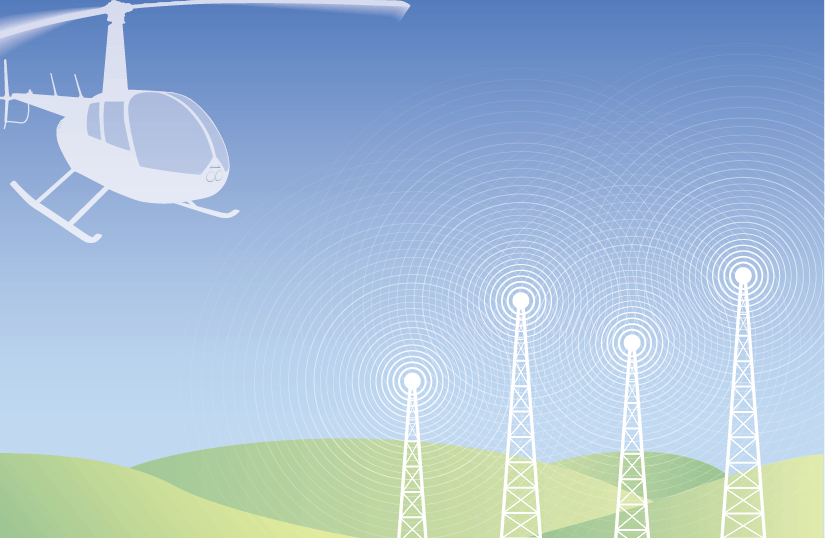 Radio frequency interference from nearby high-powered transmission broadcast towers resulted in what the pilot described as an uncommanded decrease in engine power and contributed to the June 24, 2014, hard landing of a Robinson R44 II, the U.S. National Transportation Safety Board (NTSB) says.1

Robinson Helicopter had warned of the problem in a 1999 safety notice,2 issued after several accidents that also occurred in close proximity to high-­intensity broadcast towers, the NTSB said.

In its final report on the accident, released in mid-August, the NTSB said that the probable cause was “the pilot’s failure to maintain rotor rpm during an autorotation after a perceived partial loss of power, which resulted in a hard landing.” Radio frequency interference with the helicopter’s governor controller was a contributing factor, the agency said, noting that the interference “resulted in an uncommanded decrease in throttle and the perceived loss of engine power.”

Neither the pilot nor his only passenger was injured in the accident, which occurred around 1235 local time, shortly after takeoff from John C. Tune Airport in Nashville, Tennessee, U.S., for a personal visual flight rules flight to Decatur, Illinois. The 10,000-hour commercial pilot had stopped in Nashville to refuel during a multi-leg trip from Florida to Wisconsin.

After departure, when the helicopter was about 1.5 nm (3 km) from the airport and about 400 ft above ground level and traveling about 70 kt, the pilot began a climb to clear a wooded hill near a group of broadcast towers.

“The engine began running ‘very rough,’ and the pilot felt an uncommanded movement of the throttle twist grip, which was followed by an abrupt loss of altitude,” the NTSB said in its final report on the accident. “He lowered the collective, the low-rotor rpm horn activated, and the low-rotor rpm light illuminated.”

The pilot turned the helicopter to the west to begin an autorotation and noted that engine gauges showed that the engine was producing about 70 rpm and that rotor rpm was “in the green,” the report said. The engine continued to run rough, and the pilot began the autorotation, planning to land the helicopter on a highway.

“The helicopter landed hard in a level attitude, and the main rotor contacted the tail boom, resulting in substantial damage,” the report said. “The pilot reported that he ‘didn’t have enough rotor energy left to put it down gently.’”

The pilot said that there had been no pre-impact problems with the control system that could have interfered with normal operations, and a post-accident examination of the engine, conducted under the supervision of a U.S. Federal Aviation Administration (FAA) inspector found that the engine was operating normally.

The NTSB report said that a helicopter flight instructor based at the departure airport said that he had experienced “a similar uncommanded throttle movement” two months before the accident while flying another R44 in the same area and that the low-rotor rpm light had illuminated.

He told accident investigators that he began an autorotation, but “moments later, he noticed that he still had engine power, increased throttle and was able to return safely to the airport,” the report said. “The instructor believed the event was the result of sporadic governor operation and decided to fly near the towers again in an attempt to replicate the same uncommanded throttle motion.

“The instructor was accompanied by another pilot who assisted him while he repeatedly flew the same route. During each pass near the broadcast towers, the low-rotor rpm light activated, and the governor-actuated twist grip throttle was felt moving in the throttle off direction. The pilots were able to override the governor each time by increasing throttle.”

The accident pilot said that he had decreased throttle to begin the autorotation and had not increased the throttle “at any time during his descent,” the report said.

The helicopter, which was manufactured in 2003, had a collective control that was equipped with a twist-grip throttle and an electronic governor system that was designed “to maintain engine rpm by adjusting the throttle when the collective control was moved,” the report said.

According to the pilot operating handbook, the governor could be “easily overridden by the pilot,” was active only when the engine was operating at more than 80 percent rpm and could be turned off by a toggle switch on the right-seat collective control.

Robinson Helicopter said that R22s, R44s and R44 Raven IIs all were equipped with governor controllers that determine engine speed. The governor “calculates the appropriate throttle response and engages a motor that is tied to the throttle control to the engine,” Robinson said.

The manufacturer added that the governor controller’s output to the governor motor “is a proportional controlled pulse width modulated signal. It operates at 300 Hz to 500 Hz.”

The report said that the FAA Spectrum Engineering and Policy Office — which manages all U.S. civil aviation radio frequency spectrum resources — examined circuit diagrams provided by manufacturers of the helicopter and the governor, and concluded that “the governor input circuitry was not designed to reject a high-power external radiated signal.”

The report said that the FAA found that the circuitry “provides some attenuation to RF [radio frequency] but is not effective against certain electric fields. The assembly offers no protection from magnetic fields, which makes the wiring harness susceptible to transformer effect.”

A device within the governor controller “acts as an initial RF filter,” but it “does not protect against medium and strong high-frequency RF fields, and … is not effective at lower RF frequencies,” the report said.

When RF enters the governor controller’s wiring, the report added, “the circuit acts as an amplitude demodulator. … This results in a signal that artificially increases the signal frequency that represents engine speed (adds pulses to the pulse train). Once the signal increases to more than 5 percent rpm from the centerpoint, the governor calculates the appropriate throttle response and engages a motor to decrease engine power.”

The accident occurred near four 100 kW towers, all transmitting at frequencies greater than 3 MHz, the report said.

The accident pilot said that, although he was familiar with Robinson Helicopter’s April 1999 safety notice (SN), he had not read the document since purchasing his R44 in 2007.

SN-35 was issued in response to events in which aircraft, including R22s and R44s, had experienced electrical system malfunctions during operations near high-intensity broadcast towers.

One of those events involved a Heliportugal R44 near Sines, Portugal, on March 2, 1999. A preliminary NTSB report said that the helicopter was flown within 1,000 m (3,281 ft) of a high-frequency, high-energy broadcasting transmission antenna and that the pilot “suddenly noted strong interference in the intercommunications system and on the communication and navigation radios, followed by illumination of the low-rotor rpm and clutch lights.”3

The pilot landed the helicopter, and after determining that he and his passenger were not injured and that there was no indication of a continuing problem, he flew the helicopter back to his base. A subsequent inspection found “severe damage to the main rotor blades,” the report said, noting that the engine governor was sent to a laboratory to be inspected for “suspected severe electromagnetic and radio interference impinging on engine and related systems.”

In SN-35, Robinson said that pilots might suspect the presence of a high-power radio field if they observed “strong interference in the intercom system and aircraft radio receivers,” followed by “random illumination of warning lights and erratic governor and tachometer operation.”

The document warned, “If the pilot has removed his hand from the collective to adjust the radio due to the interference, initial erratic operation of the governor may go unnoticed. Under these conditions, the governor may roll the throttle to idle or open it rapidly, overspeeding the engine and rotor.”

“Do not fly near broadcast towers.

“Do not become distracted trying to adjust the radio or intercom to reduce interference. Keep one hand on the collective and throttle and be prepared to switch off the governor and assume manual throttle control.