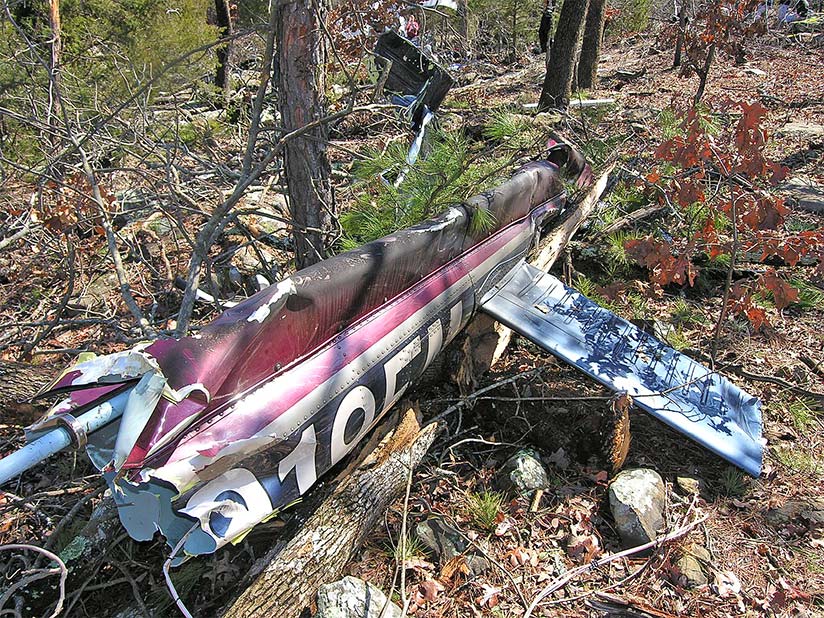 Shortly after the two medical crewmembers in a Eurocopter AS350 B2 saw trees beneath the helicopter during a dark night flight in instrument meteorological conditions (IMC) and told the pilot to “pull up,” he told them he planned to divert to another airport. Then he began a left turn that ended in the emergency medical services (EMS) helicopter’s crash into trees and terrain.

The pilot was killed in the March 12, 2015, crash in Eufaula, Oklahoma, U.S., and the flight nurse and emergency medical technician (EMT) received serious injuries. The helicopter, owned and operated by EagleMed, was destroyed.

In its final report, the U.S. National Transportation Safety Board said the probable cause of the accident was the “inadvertent encounter with night instrument meteorological conditions, which resulted in the pilot turning the helicopter and subsequently descending into trees and terrain due to spatial disorientation.”

The accident occurred during a positioning flight back to the EagleMed base at McAlester (Oklahoma) Regional Airport after the crew had transported a patient to a hospital in Tulsa, about 100 nm (185 km) north of McAlester.

During the flight, however, the pilot commented that the clouds were lower than he had expected, and around Okmulgee, about halfway to Tulsa, he descended to 1,500 ft. He landed the helicopter at the hospital helipad without incident and checked weather conditions for the return flight to McAlester; the reported ceilings and visibility were the same as those that had been reported earlier for the flight to the hospital.

“After the pilot conferred with the medical crew per their risk management procedures, they decided to return to the base as planned,” the report said. Company procedures included the EagleMed “Three to Go — One to Say No” policy, which requires all crewmembers to agree before accepting a mission; under the policy, if one crewmember believes there would be a problem with the flight, the crew rejects the assignment.

The EMT told accident investigators that the crew had agreed that they would turn back to Tulsa “if weather was questionable again at Okmulgee,” and they reviewed procedures for inadvertent entry into IMC.

Dark night visual meteorological conditions prevailed for the flight to McAlester, and the helicopter headed south at a cruise altitude of about 1,500 ft above mean sea level — or 600 to 800 ft above the ground.

The EMT said that the helicopter was flying at 1,500 ft near Okmulgee and the crew believed “they should be good.”

“The EMT, seated in the far left back seat, stated that they were about halfway to [McAlester Airport] when they suddenly entered … IMC,” the report said. “He recalled the pilot saying that this was ‘not good.’ He told the pilot to climb to 3,500 ft., but he did not think the pilot initiated a climb. He also told the pilot that he could see lights on the horizon. The pilot asked him to ‘tell him about those lights.’ He told the pilot, ‘They are to the left,’ and gestured a left turn with his hands. The EMT said that he then saw a strobe flash and trees and said, ‘pull up,’ but the helicopter crashed.”

The flight nurse, who had been seated in the far right back seat, told investigators that, after they left the Tulsa area, the pilot had been practicing an exercise involving inadvertent entry into IMC — an exercise that she said the crew engaged in “randomly.”

On this occasion, the practice session was initiated by the EMT, she said, recalling that he had suggested that they perform the exercise “just in case.”

During the practice, the EMT said they had entered a cloud.

“The pilot responded, ‘What do I do now?’ and the EMT answered ‘go up,’” the report said. “The pilot then said that he was proceeding to Okmulgee … because he could see lights to the left,” the report said. “He then said, ‘I’m turning left.’ When he started the turn, the EMT began yelling ‘pull up.’”

The pilot said “What’s that noise?” The EMT responded that an altitude warning was sounding.

“The flight nurse said she started seeing trees and then did not see or hear anything after that,” the report said.

After the crash, the EMT pulled the flight nurse out of the wreckage, determined that the pilot had died and called a company dispatcher to report the accident and its location, at an elevation of 840 ft atop a wooded hill nine mi (14 km) west of Eufaula. Emergency responders hiked through the woods and reached the area several hours later.

The 41-year-old accident pilot held a commercial pilot certificate with single-engine land airplane and helicopter ratings, an instrument rating and a current second-class medical certificate. He had 2,385 total flight hours, including 135 hours in the AS350 B2. His most recent flight review was completed Feb. 24, 2014, in an AS350 B2.

The helicopter, manufactured in 2006 by Eurocopter (now Airbus Helicopters) and configured for EMS operations, had a total airframe time of 1,943 hours. The helicopter was equipped with a Turbomeca Arriel 1D1 engine that had 1,935 hours total time. Accident investigators found no pre-impact problems that would have prevented normal operation of the helicopter, the report said.

The report said the helicopter was maintained according to a company aircraft inspection program. Its most recent inspection was a 100-hour inspection conducted on March 9, three days before the accident.

The report said that the U.S. Federal Aviation Administration had conducted a ramp inspection of the Eagle Med facility in McAlester the day before the accident and discovered discrepancies involving the helicopter’s radio altimeter, which required a new filter, and its night vision goggle (NVG) system. As a result, NVG operations were prohibited until a 100-hour inspection of the NVG system was completed.

The EMT told accident investigators that he wished use of the NVG system had been permitted during the accident flight because he believed that the crew would have been able to see more distant cloud layers, the report said.

At the time of the accident, weather conditions at Okmulgee Regional Airport, 20 mi (32 km) north-northwest of the accident site, included visibility of at least 10 mi (16 km), a broken ceiling at 2,400 ft above ground level (AGL) and a broken cloud layer base at 3,000 ft. At 2255, however, conditions included scattered clouds at 1,100 ft AGL.

This article is based on U.S. National Transportation Safety Board aviation accident report CEN15FA171, finalized May 23, 2017, and supporting documents.