The Link Between Weight and Sleep 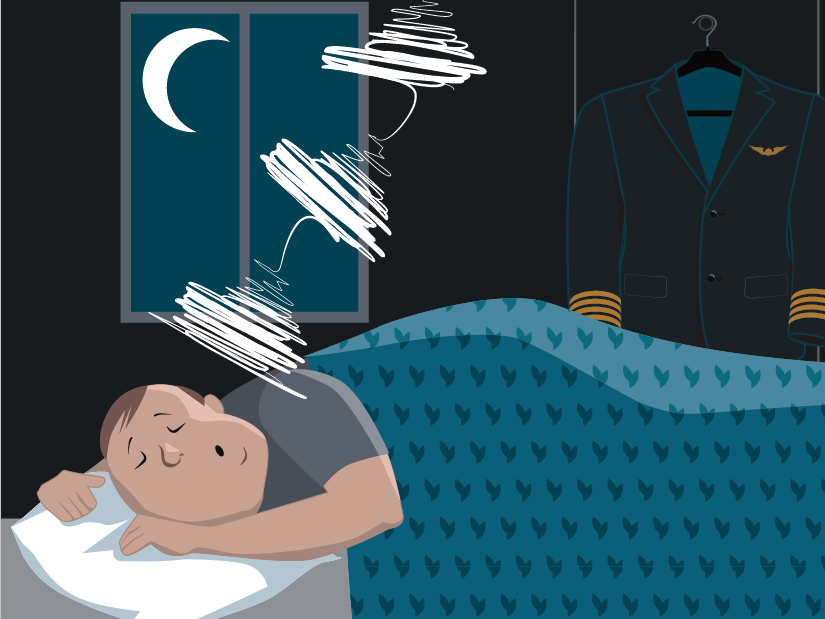 Specialists in sleep and aviation medicine have revived a controversial proposal to screen extremely obese pilots for obstructive sleep apnea (OSA) and to treat those who are found to have the disorder.

OSA is “strongly associated with impaired cognitive performance and daytime performance,” a team of sleep specialists said in a report that was approved as a position paper of the Aerospace Medical Association (AsMA).1

In turn, the report said, “There is a very strong relationship between elevated BMI [body mass index, a gauge of body fat that takes into account a person’s height and weight] and presence of sleep apnea” (see “Calculating BMI”).

The report, published in the September issue of AsMA’s Aerospace Medicine and Human Performance, said that OSA screening should be required for pilots whose BMIs are in the “morbidly obese” category — that is, those with a BMI of at least 40. That would mean, for example, a 6-ft-tall (2-m-tall) pilot who weighed 295 lb (134 kg) or a 5-ft 5-in (1.7-m) pilot who weighed 245 lb (111 kg); both would have BMIs at or just over 40.

Studies have found that OSA plays a role in motor vehicle accidents, but there is “a paucity of pilot-specific data,” the report said, adding that, although OSA has never been named as a causal factor in an aviation accident, the disorder has occasionally been mentioned in official accident reports.

Body mass index (BMI) — a widely used method of measuring overweight and obesity — is determined by using an online calculator1 or by dividing weight in kilograms by height in meters squared, or weight in pounds by height in inches squared and multiplying by a conversion factor of 703.

As an example, the AsMA report cited a Feb. 13, 2008, incident in which the captain and first officer of a go! Bombardier CL-600 both fell asleep during a midmorning flight from Honolulu to Hilo, Hawaii, and overflew Hilo by 26 nm (48 km). According to the U.S. National Transportation Safety Board (NTSB) report on the incident, air traffic control tried repeatedly to contact the flight crew but received no response. After 18 minutes, the crew contacted a controller and turned back to Hilo.2

The NTSB report said that, soon after the incident, the captain was diagnosed with severe OSA.

“Symptoms (such as snoring) and risk factors (such as obesity) were present before the incident,” the NTSB said, adding that the disorder “likely caused him to experience chronic daytime fatigue and contributed to his falling asleep during the incident flight.”

The U.S. Federal Aviation Administration (FAA) has said that an analysis of the NTSB’s database indicated that sleep apnea was mentioned in its reports on 34 accidents and incidents, including 32 fatal accidents, as being present in the pilot’s medical background. Sleep apnea was not listed as a factor in any of those accidents, the FAA said.3

The AsMA report said that sleep apnea has been studied more frequently in motor vehicle accidents, adding that a review of 40 studies of noncommercial drivers found that those who had been diagnosed with OSA were “at increased risk for a traffic accident.”

In 2008, the U.S. Federal Motor Carrier Safety Administration recommended OSA screening for commercial driver license candidates with a BMI of more than 30, the report said.

The AsMA report said that “extrapolation from the motor vehicle data (a setting likely to be less cognitively demanding) strongly suggests that screening and treatment for OSA should be considered in this [morbidly obese pilot] population. While the approach to the optimal screening of the general pilot population is being debated and refined, individuals who are morbidly obese and in whom OSA is highly likely should undergo screening.”

Similar reasoning was paired with a similar policy proposal in 2013 when Fred Tilton, then the U.S. federal air surgeon, said that FAA medical examiners should be required to calculate the BMI of every pilot and that pilots with BMI scores of 40 or more should be referred to sleep specialists and required to undergo treatment for OSA before receiving a medical certificate (ASW, 2/14).

By early 2015, the FAA had backed away from that plan, and instead issued guidance to medical examiners, calling on them to screen for OSA by conducting an “integrated assessment” of a pilot’s medical history, symptoms and clinical findings and not by relying solely on the pilot’s BMI.

The FAA requires pilots who have been diagnosed with OSA to obtain medical certificates by special issuance — a requirement that is satisfied after the pilot demonstrates, usually by submitting sleep records and other information about what action he takes to eliminate daytime sleepiness, that the disorder does not interfere with performance of pilot duties.

The authors of the new report endorsed by AsMA said their conclusions were based on a review of major risk factors for sleep apnea, as well as treatment of the disorder and information about its effects on “performance in transportation-related occupations.”

OSA — the most common form of sleep apnea — occurs when muscles in the throat relax enough to block the airway, interrupting breathing for 10 to 20 seconds at a time. These interruptions may lower the oxygen level in the blood. The brain “senses this impaired breathing and briefly rouses you from sleep so that you can reopen your airway,” the Mayo Clinic says in its discussion of OSA.4 “This awakening is usually so brief that you don’t remember it.”

The interruptions can occur 30 times or more an hour, preventing normal restorative sleep and increasing the likelihood of sleepiness during normal waking hours.

People with OSA “often experience severe daytime drowsiness, fatigue and irritability,” the Mayo Clinic says. “They may have difficulty concentrating and find themselves falling asleep at work, while watching TV or even when driving.”

OSA causes “significant stress” on the cardiovascular system, with the heart rate and blood pressure increasing during the sleep interruptions and decreasing to normal levels as the person goes back to sleep, the AsMA report says. “This may ultimately result in hypertension [high blood pressure], congestive heart failure and other cardiovascular complications.” Among those other complications are heart attack, stroke and arrhythmias (abnormal heart rhythms).

A number of factors put people at risk of developing OSA, including smoking tobacco; drinking alcohol; being male, black, overweight or between the ages of 18 and 60; having chronic nasal congestion; and having a large neck (with a circumference greater than 17 in [43 cm] for men or 16 in [41 cm] for women). At the top of the list, however, is overweight or obesity, which the AsMA report described as “the most important modifiable risk factor for developing obstructive sleep apnea.”

About half of all people with OSA are overweight, the Mayo Clinic said, adding that deposits of fat around the upper airway may obstruct breathing. Nevertheless, not everyone with OSA is overweight, and the disorder also occurs in thin people, the clinic said.

The AsMA report, however, noted that, among people with BMIs of 40 or higher, sleep apnea is “nearly universal,” citing data that show the disorder in an estimated 98 percent of that group. 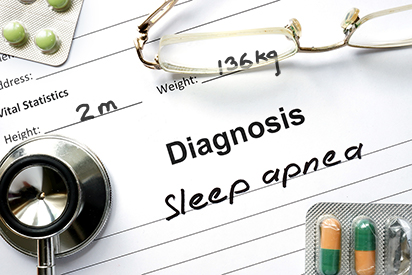 “Body weight in the general population has been rising at a rapid rate since the 1980s,” the report said, citing U.S. and worldwide data. “Worldwide, the prevalence of being overweight [according to BMI criteria] increased from 25 [percent] to 34 percent, and of being obese … increased from 6 [percent] to 12 percent between 1980 and 2008.”

Screening for OSA usually begins during a general physical examination, with the patient answering questions about whether he or she snores loudly, whether he feels refreshed upon waking and whether daytime sleepiness is a problem. The BMI also is considered, along with such factors as morning headaches and the presence of high blood pressure, both of which are among the symptoms of OSA.

People initially found at high risk of OSA typically are sent for clinical evaluation by a sleep specialist, who often recommends a sleep study — an overnight sleep session designed to monitor the patient’s breathing, pulse, heart and brain activity, and movement.

The AsMA report said that in recent years, an at-home test has been developed for OSA. Although home tests are less expensive than a laboratory sleep test, they require interpretation by a specialist and “can only be used to rule in sleep apnea,” the report said. “A negative home test means that the patient must start the process again in the laboratory.”

If results of a home test are positive, however, treatment can be prescribed.

The report said that continuous positive airway pressure (CPAP) therapy — in which a device blows a steady stream of air through a tube and into a mask that covers the patient’s nose, or both the nose and mouth — “remains the gold standard” for OSA treatment. The air flow is designed to keep the airway open.

In addition to CPAP, other treatments — typically designed for people with mild to moderate sleep apnea — involve surgery or the use of a specially designed oral appliance.

“Although many real-world constraints may prevent every person in a safety-sensitive occupation from receiving consistent, high-quality sleep in all situations, ensuring that these personnel are free from treatable disorders that prevent high-quality sleep is an achievable objective,” AsMA said. “With proper screening and follow-up … the risks associated with sleep apnea can be reasonably managed in the modern occupational environment.”