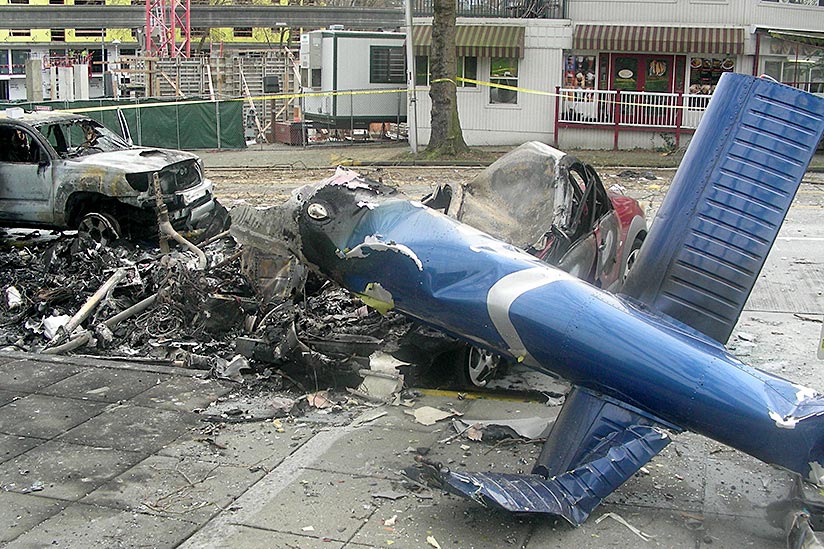 The Eurocopter1 AS350 B2 had just lifted off from a Seattle rooftop helipad for a repositioning flight when it yawed left, climbed slightly and then spun to the ground and crashed into a city street, killing the pilot and a television cameraman in the passenger seat.

A person on the ground received serious injuries when the helicopter — used by a Seattle television station in electronic news gathering — struck the automobile in which he was sitting and exploded in flames. The helicopter was destroyed.

Fire damage to the hydraulic system, as well as the absence of a flight recorder, left accident investigators unable to determine a cause of the loss of hydraulic boost to the main and tail rotor controls, the report said.

The accident occurred at 0738 local time, after takeoff from the KOMO-TV heliport, where the helicopter had been refueled for a repositioning flight in visual meteorological conditions to Renton Municipal Airport, about 14 mi (23 km) southeast of Seattle.

The descent continued to the street below, where the helicopter struck an occupied automobile.

The accident pilot, 59, held a commercial pilot certificate, a helicopter flight instructor certificate and a helicopter instrument rating. He had about 6,540 flight hours, all in rotorcraft; his time included 6,296 hours as pilot in command and 5.5 hours in the AS350 B2, along with more than 1,000 hours each in the AS350 D, the Bell 206 and the Bell 407. He had completed his most recent flight review in the accident helicopter the month before the accident.

The pilot flew the news helicopter part time on the early-morning shift, before reporting to his full-time job as an engineer for an airplane manufacturer. He typically awakened by 0400 and reported to his part-time flying job at 0500, then went to his full-time job around 1000. He went to bed around 2000. According to a family member, the pilot was “in excellent health, had no sleep disorders and had performed this schedule for many years,” the report said, noting that the pilot had begun flying news helicopters in 2002. “Additionally, the family member opined that the pilot was looking forward to flying full time after retiring from his full-time job.”

The accident helicopter — which, at the time of the accident, had accumulated 7,707 hours — had arrived Jan. 30, 2014, at the Renton base of the operator, Helicopters Inc., which operated more than 70 electronic news gathering helicopters in 36 cities across the United States. The accident pilot began AS350 B2 training the next day. He passed a check ride and the AS350 limitations written test on Feb. 8. The next time he flew the helicopter was the day of the accident.

The report said that although accident investigators did not find the helicopter’s checklist when they examined the helicopter, the operator’s assistant director of operations, the safety director and the two pilots who had ferried the helicopter to Renton — the company’s check airman and a Renton-based pilot — said that the checklist that had come with the helicopter was the Abbreviated Checklist for the AS350 BA/B2, Revision 1. (The checklist was an internal company document developed from the Rotorcraft Flight Manual.)

Questioned again several weeks later, the check airman said that he could not recall if the checklist was in the helicopter during the ferry flight or during the accident pilot’s training.

At the time, the current version of the Rotorcraft Flight Manual (RFM) was Revision 4. Both Revision 4 and the previous version, Revision 3, contained updated instructions — not included in Revision 1 — for preparing for preflight hydraulic system checks.2 Those updated instructions told pilots that before performing the checks, they should “set the fuel flow control level (FFCL) to a position between the ‘OFF’ and ‘FLIGHT’ detents.” The previous procedure, outlined in Revision 2 and earlier versions, called for setting the FFCL in the “FLIGHT” detent.

“According to the airframe manufacturer, the change … was a result of several events where the helicopter became unintentionally airborne due to the collective stick becoming unlocked during the hydraulic system checks,” the report said.

The airframe manufacturer said that six copies of RFM Revision 3 had been mailed to the operator, but the report said investigators found no indication that the previous version of the Abbreviated Checklist had been revised to incorporate the change.

The check airman who provided recurrent training for the accident pilot said he had instructed the pilot to use the Revision 3 procedures and that, after the revision was issued, he had told the chief pilot about the change; the checklist was not revised, however.

The operator said that the failure to either revise the Abbreviated Checklist or remove it from the helicopter was an oversight.

Investigators said the most likely accident scenario would have begun with a loss of pressure during a preflight check of the helicopter’s hydraulic system accumulator.

“In this scenario, the pilot would have engaged the ‘HYD TEST’ button and then moved the cyclic control stick to verify that the main rotor accumulators were functioning properly,” the report said. “If the collective stick was not locked during this check and one or more of the main rotor accumulators [was] depleted by the cyclic movements, the collective would have moved up rapidly. … The uncommanded movement is prevented by engaging the collective lock as specified in the preflight checklist.”

The NTSB considered, but ultimately rejected as unlikely, two other scenarios. Under one of those scenarios, hydraulic pressure would have been lost because of mechanical failure “and simultaneous failure of the yaw load compensator.” Under the second scenario, the problem would have resulted from “a misconfiguration of the hydraulic system at the conclusion of the preflight hydraulic system checks.”

In its analysis of the most likely scenario, the NTSB said that the pilot presumably used the outdated checklist that specified that the FFCL be set to the “FLIGHT” detent during the preflight check of the hydraulic system.

In ground tests using the procedures outlined in Revision 3 of the flight manual, with the FFCL set between the “OFF” and the “FLIGHT” detents, “no heave (upward movement) was felt,” the report said.

“If the pilot did not lock the collective and performed the accumulator check with the FFCL in the ‘FLIGHT’ detent per the operator’s checklist, he may have been startled by an uncommanded increase in collective and the accompanying heave,” the report added. “The pilot may have reacted by manually increasing collective pitch, resulting in an unplanned takeoff. Once airborne, the lack of hydraulic boost to the pedals would have resulted in an uncontrolled left yaw, and, as all three main rotor accumulators became depleted, the main rotor controls would have lost hydraulic boost, resulting in a rapid loss of control. This scenario best matches the video evidence.”

The airframe manufacturer told investigators that between 2000 and 2006, five known accidents or incidents occurred that involved either the inadvertent unlocking of the collective stick control before pre-takeoff hydraulic checks or a pilot’s failure to ensure that the control was properly locked.

The five events included two accidents investigated by the NTSB. The investigations found that when the main rotor accumulators were depleted during the hydraulic accumulator check, “the unsecured collective stick raised enough to cause the helicopter to inadvertently lift off.”

Three of the events resembled the Seattle accident in that they involved the helicopter spinning counterclockwise as it lifted off.

“Because the pilots [in] these events did not have hydraulic assistance to the main and tail rotor controls, the pilots could not regain control of the helicopter, and subsequently, the helicopter impacted terrain,” the report said, adding that in all five events, the helicopters were relatively close to the ground and there were no fatalities.

After those incidents, the manufacturer issued Revision 3 of the flight manual with changes intended to mitigate the risk of an inadvertent takeoff.

The NTSB included in the report its observation that, if the accident helicopter had been required to be equipped with a recorder system to capture audio, images and flight data, “it would likely have enabled reconstruction of the sequence of events leading to the loss of control.”

The NTSB has made such recommendations to the U.S. Federal Aviation Administration and has included the call for recording system requirements in its “Most Wanted List of Transportation Safety Improvements.” The 2016 list says that “transportation operators and investigators must have an accurate picture of an accident to prevent future accidents. No single tool has helped determine what went wrong more than recorders.”3

This article is based on NTSB accident report WPR14FA137 and associated documents, available at <www.ntsb.gov>.

The ‘sudden displacement of the cyclic stick’ began a chain of events that led to the crash of a Bell 206B, the NTSB says.

Helmets are crucial for pilots on low-level flights, the ATSB says after investigating a fatal R44 crash.