The NTSB says it found significant wear in parts of the engine of a Bell 407 involved in a fatal Gulf of Mexico crash. 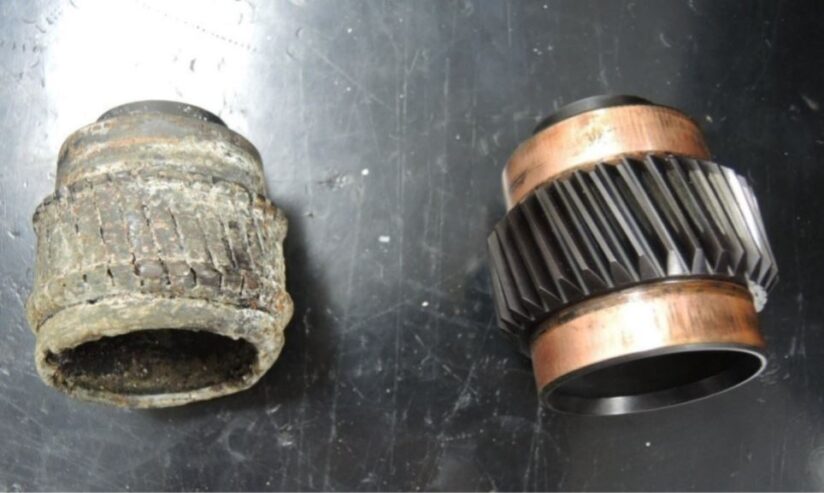 Parts of a Bell 407’s engine were so “significantly worn and smeared” that the engine could no longer power the helicopter’s rotor system, causing the pilot to lose control and the helicopter to crash into the Gulf of Mexico, the U.S. National Transportation Safety Board (NTSB) says.

The pilot and his passenger were killed in the Dec. 7, 2019, crash, about 25 nm (46 km) off the Louisiana coast, and the helicopter was destroyed.

In its final report on the accident, the NTSB said the probable cause was the “total loss of engine power due to the failure of the engine’s Nos. 3 and 4 bearings and the power turbine pinion gear, and subsequent loss of main rotor rpm, which resulted in a loss of control and impact with the water.”

The accident occurred as the helicopter, operated under U.S. Federal Aviation Regulations Part 135 as a business flight, was flying on a company visual flight rules flight plan between two oil platforms. It had been in cruise at 700 ft above mean sea level before the pilot conducted a gradual descent to 375 ft. The helicopter then entered a left turn and descended to 150 ft as its groundspeed declined from 115 kt to 75 kt. It struck the water and sank about 190 ft to the floor of the Gulf.

On the day of the accident, the pilot began the work day with a takeoff at 0655 local time from Grand Isle, Louisiana, U.S. The accident occurred later, during his eighth flight of the day, which began when he left oil platform SP77A around 0834. He headed for platform WD73, about 17 nm (31 km) to the northwest, conducting pollution control inspections along the route. He made what was intended as a fueling stop at platform WD109, but after learning that the fuel nozzle was broken, he departed at 0910 for WD73, with the helicopter carrying one passenger and 1 hour 20 minutes of fuel. The flight was expected to take 20 minutes.

At 0915, the pilot contacted WD73 personnel to say the helicopter was 10 minutes away.

WD73 personnel reported the helicopter overdue at 1011, and an alert notice was issued at 1121.

The U.S. Coast Guard recovered several small pieces of wreckage near another platform, about 25 mi west of the spot where the main wreckage was found one week later, about 350 ft southwest of the last recorded ADS-B data point. Recovery operations were delayed until Dec. 20 because of weather.

The pilot, who had a commercial pilot certificate and a helicopter instrument rating, had 3,180 flight hours, including 500 in the Bell 407.

A 600-hour/12-month inspection and an engine oil change were performed in May and again in October, the report said, adding, “According to the operator’s director of maintenance, during a typical engine oil change, the combined engine filter assembly (CEFA) oil filter, which filters engine scavenge oil, is inspected for contamination and reinstalled if none is found.”

Records also showed that the engine had been overhauled in September 2016 when engine total time was 5,894 hours. The overhaul included a 2,000-hour nonintrusive gearbox inspection, which the report said was “a visual inspection primarily aimed at the power turbine pinion and torquemeter gear mesh.” No problems were reported.

An examination of the engine found that “the power turbine pinion gear teeth were significantly worn and smeared, which ultimately resulted in the engine’s inability to provide power to the rotor system,” the report said.

Most of the No. 3 bearing was not recovered, the report added, but “significant thermal damage and loss of material of the power turbine pinion gear shoulder, to which the No. 3 bearing inner race was installed, indicated that the bearing likely failed first.”

The cause of the bearing failure could not be determined, however.

Blockages were found in the oil delivery tube and oil nozzle, but investigators said they likely resulted from immersion in saltwater; it could not be determined whether there had been problems before the accident. The recovered engine bearings and gears showed no indication of damage that would have been associated with a widespread lubrication issue, the report said.

The document also noted that several annunciator lights were illuminated at the time of the crash, “consistent with the effects of a loss of engine power due to a failure of the power turbine pinion gear.”

The investigation could not determine the pilot’s cyclic and pedal inputs or the helicopter’s attitude and airspeed when it lost engine power.

“Therefore, it could not be determined if the pilot successfully entered autorotation or the reasons why the pilot increased collective control about three seconds after the loss of engine power,” the report said. There was no indication that the helicopter’s emergency flotation system was deployed.

This article is based on NTSB accident report CEN20FA035 and associated documents. Dec. 7, 2019.

Insight: Expanding the Focus on ‘Pre-Accidents’

A safety department’s examination of everyday concerns can detect drift toward a dangerous operational state.

The NTSB says the airplane’s horizontal stabilizer actuator had separated.

A 737’s low thrust setting kept the airplane on the ground until only 400 m of runway remained, the U.K. AAIB says.