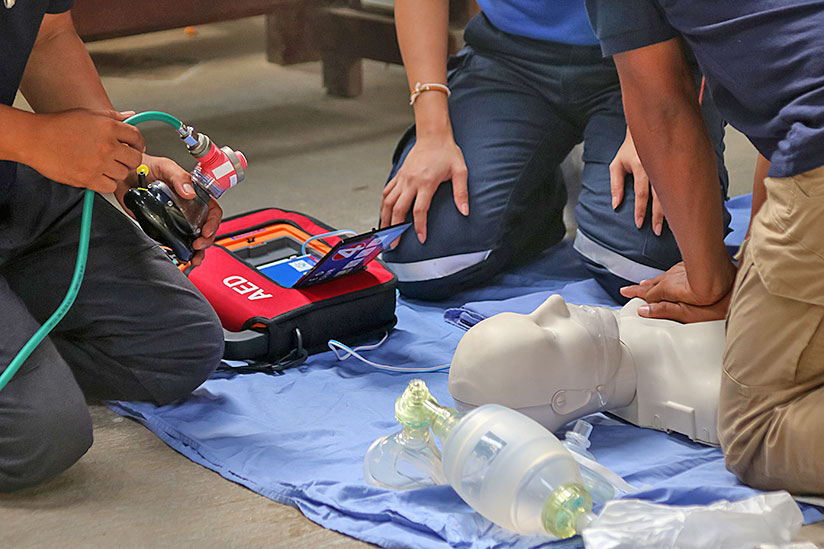 Exposure to simulated in-flight medical emergencies could help prepare medical personnel — and crewmembers — to respond appropriately to actual emergencies, according to a small study by researchers from the United States and Saudi Arabia.1

In a report published in the December issue of Aerospace Medicine and Human Performance, the researchers said that opportunities for such training are limited and suggested that medical schools could offer courses as electives, either separately or incorporated into existing classes in wilderness medicine or “austere” medicine (medicine practiced in a resource-limited environment).

The report cited recent studies that included a wide range of estimates of the frequency of in-flight medical emergencies and noted that one conclusion was that medical events occur about once in every 11,000 passengers. A small percentage of those events result in diversions to enable the patient to receiver further medical care.

Instructions specifically aimed at handling in-flight medical problems can help, the report said, and a helpful instructional session, including both a lecture and simulation, can be as short as 90 minutes.

Researchers developed a simulation-based course for teaching the handling of common in-flight medical problems, including fainting, an allergic reaction and respiratory problems, and commonly fatal problems such as cardiac arrest.

“The cases were designed to encourage prudent resource management and to force learners to engage in decisions regarding airplane diversion,” the report said. Researchers created a 15-item multiple choice quiz to assess students’ knowledge before and after the training session.

A simulated airplane cabin, with dimensions resembling those of a Boeing 737, was created, and medical students were recruited for participation from among those attending an elective class in wilderness and extreme environmental medicine. The report’s authors acknowledged that the ground simulation did not precisely replicate conditions of an actual flight when “the noise and vibrations may make diagnosis with a stethoscope challenging,” the report said.

The 18 students (third- and fourth-year medical students) participated in four simulated medical events. The quiz was administered before the course and again about 10 days later. Quiz results showed that the training session increased their skills in handling the simulated events, with mean scores of 75.6 percent on the pretest and 87 percent on the post-training test.

“While the sample size was relatively small, these results suggest that a brief simulation training session can significantly increase both familiarity and knowledge with respect to physician response to common in-flight medical emergencies,” the report said. Student response to the training was “overwhelmingly positive.”

The report acknowledged limitations of the study, including the low enrollment and the absence of an additional quiz to evaluate longer-term retention of what was learned. Although the medical scenarios were selected in part because of the frequency of such in-flight events, the report’s authors said that other conditions also could be covered.

Despite the limitations, the report said that the study showed that simulated training for in-flight medical emergencies could be “a welcome addition to medical education opportunities for senior-level medical students,” and also could be modified to educate aircraft crewmembers.