An MD-83 flight crew pressed on after one engine lost power en route, only to lose the other engine on approach. 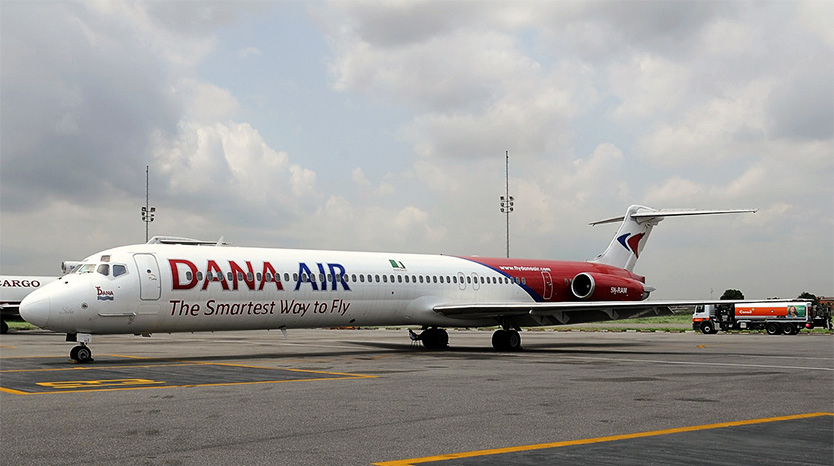 There was a strong hint of trouble when the left engine lost power shortly after the aircraft departed from Abuja, Nigeria, for a flight to Lagos. Rather than diverting to a closer airport, the flight crew continued toward Lagos, said the report by the Accident Investigation Bureau of Nigeria (AIB). The right engine subsequently lost power on approach, and the Boeing MD-83 crashed in a residential area, killing all aboard and several people on the ground.

The accident occurred the afternoon of June 3, 2012, during the last leg of two round-trip flights between Abuja, in central Nigeria, and Lagos, a coastal city about 270 nm (500 km) southwest. The aircraft was being operated by Dana Airlines Nigeria (Dana Air) as Flight 0992. 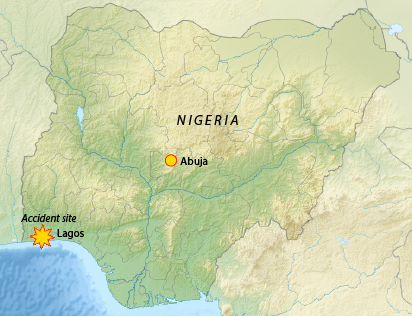 Both pilots were foreign nationals. The captain, 55, was an American with 18,116 flight hours, including 7,466 hours in type. He was employed by Dana Air in March 2012. The report said that the airline’s background check of the pilot was inadequate and that he was “hurriedly hired.”

“The pilot was suspended in 2009 by the U.S. Federal Aviation Administration (FAA) for some misdemeanors related to a heavy landing and fixing of panels that were neither entered in the aircraft logbook nor reported,” the report said.

Investigators found that the revalidated airline transport pilot license issued by the Nigerian Civil Aviation Authority (NCAA) was stamped with the agency’s seal but was not signed by any NCAA official.

“Most of the recommendation letters submitted by the captain [to Dana Air] were also not signed,” the report said.

The captain’s line training was “hurriedly carried out,” and his records included several critical remarks by Dana Air’s training captains. Among the deficiencies cited were inadequate cockpit discipline, inadequate radio communication techniques and nonadherence to company and regulatory procedures.

Although the airline’s check captain noted that the captain exhibited “good airmanship” during his final line check on May 1, 2012, he cited continuing deficiencies in observing transition altitudes and monitoring air traffic control (ATC) transmissions. The check captain called for “more improvement,” the report said.

“There was no evidence that the deficiencies observed by the check captain were addressed before the accident captain was released for line operation,” the report said. The captain began flying as a pilot-in-command for Dana Air the day after his final line check and subsequently logged more than 120 flight hours during the two months preceding the accident.

The first officer, 34, was a native of India. He had 1,143 flight hours, including 808 hours as an MD-83 second-in-command. “He was previously employed at Dana Air as the director of cabin service before he was hired as a pilot in January 2011,” the report said.

The aircraft was manufactured in 1990 and had accumulated 60,850 hours in service. “A review of the aircraft technical logs did not reveal any anomaly that would have had serious effect on the airworthiness of the aircraft,” the report said.

During the second round-trip flight the day of the accident, the aircraft was about one hour late when it arrived in Abuja. The captain told a ground engineer that the rear passenger door was not to be used. “The reasons for this instruction were not known,” the report said.

Both pilots refused a ramp officer’s request to begin boarding passengers for the flight to Lagos. The ramp officer was told to delay boarding until the pilots completed a meeting with crewmembers. “Details of this meeting were not known to anyone,” the report said.

Flight 0992 departed from Abuja at 1458 local time. The estimated flight time to Lagos was 45 minutes, and the aircraft had sufficient fuel for 3.5 hours of flight. The first officer was the pilot flying.

The aircraft was cruising in visual meteorological conditions at 26,000 ft when the left engine lost power 17 minutes after the departure from Abuja. No engine parameters were available to investigators because the flight data recorder tape was destroyed by fire when the aircraft crashed. Although the cockpit voice recorder (CVR) also was severely damaged by fire, it yielded about 30 minutes of data.

The CVR recording began shortly after the pilots noticed something amiss with the left engine. “The captain and first officer were in a discussion of a non-normal condition regarding the correlation between the engine throttle setting and an engine power indication,” the report said. “However, they did not voice concerns then that the condition would affect the continuation of the flight.” At one point, the captain said, “We just want to get home.”

Although specific information about the engine problem was not provided by the report, subsequent events indicated that a partial power loss had occurred and the engine would not respond to throttle movement.

The first officer suggested that they ask a company maintenance technician who was among the passengers to come forward and help them diagnose the engine problem. The captain declined, saying, “Well, I don’t need him here ’cause we can figure it out. He’s not going to be able to help us.”

The report said, “During the period that the flight crew were discussing and trying to manage the situation they were facing, the captain also asked the first officer if any engineer had tampered with the panel by the rear exit door on the ground in Abuja and finally concluded that ‘this is the guy that had an issue with us. He’s [angry] with us.’” No further information about the panel or the “issue” was provided by the report.

The pilots did not discuss the option of diverting to a closer airport, as required by the quick reference handbook. “There are suitable airports for landing between Abuja and Lagos, notably Ilorin Airport, which was officially filed as the alternate,” the report said. “Akure and Ibadan Airports [also] were within the reach of the crew in an emergency.”

The report noted that the pilots “became increasingly concerned” about the engine problem as the flight continued toward Lagos but that “there was no evidence from the CVR transcript that an engine-out descent profile was followed” as the aircraft neared Lagos.

The report said that the first officer made “good contributions,” such as recommending a delayed descent, but was continuously overruled by the captain. “If the crew had maintained high altitude, as suggested by the copilot, they would have had height advantage over Lagos for better speed [control] and manoeuvring,” the report said. “The cockpit gradient was steep; this made the copilot less assertive.”1

The crew was receiving vectors from ATC to intercept the instrument landing system final approach course to Runway 18R at Lagos at 1531 when power from the left engine decreased to idle. The power reduction was uncommanded, and the engine would not respond to throttle movement.

The crew did not advise ATC of their situation. The captain assumed control of the aircraft, and the pilots verified that the right engine appeared to be functioning normally and was responding to throttle movement. “OK,” the captain said, “This one is good for us so far.”

‘We Just Lost Everything’

The crew had to increase power from the right engine to counter the increased drag as the flaps and landing gear were extended to configure the aircraft for landing. The MD-83 was on final approach at 1543 when an uncommanded power loss occurred in the right engine. Both engines now were producing idle thrust and not responding to throttle movement.

The captain told the first officer, “We just lost everything. … I lost both engines.”

The crew declared an emergency and told ATC “dual engine failure … negative response from the throttles.” Nevertheless, the first officer told the purser to prepare the cabin for landing and that the situation was under control.

“During the next 25 seconds until the end of the CVR recording, the flight crew attempted to recover engine power without reference to any checklist,” the report said. The crew began to receive automated warnings of “altitude,” and the captain told the first officer to retract the flaps and landing gear. “At this point, the captain stated that he would not want to stall the aircraft,” the report said. “The captain requested everything that could help recover thrust, including ‘relight … ignition override … just everything.’”

The “altitude” warnings continued until the CVR recording ceased at 1545. All 153 people aboard were killed when the aircraft struck trees and four buildings in a densely populated area about 6 nm (11 km) north of the airport. “There were also six confirmed ground fatalities,” the report said.

The MD-83, which had about 18,000 lb (8,165 kg) of fuel aboard, was destroyed by the impact and post-crash fire. “One of the buildings the airplane crashed into was a printing press with a huge amount of paper and other printing materials, which enhanced the fire,” the report said. “It was a massive fire.”

“The aircraft wreckage was concentrated in a small area,” the report said. “The huge crowd of people at the crash site slowed down rescue efforts and [the] investigation. … The tail section, both engines and portions of both wings, representing only about 15 percent of the airplane, were recovered from the accident site, while the rest of the aircraft was destroyed by the impact forces and fire outbreak,” the report said.

The AIB concluded that the probable causal factors of the accident were the following:

Examination of the aircraft’s Pratt & Whitney JT8D-217C engines revealed that their primary and secondary fuel manifold assemblies were “fractured, cracked, bent, twisted or pinched, which led to fuel leaks, fuel discharge to bypass ducts, loss of engine thrust and obvious failure [to respond] to throttle movement,” the report said.

The most recent overhauls of the engines were performed in 2011 by Millenium Engine Associates in Miami, Florida, U.S. “The work processes, ethics and culture [at that company] are subjects of concern” to the NCAA and the AIB, the report said.

The report explained that a similar incident occurred on Oct. 6, 2013, when the left engine on a Dana Air MD-83 rolled back to idle power and did not respond to throttle movement. “The crew had noticed slow acceleration of the no. 1 engine in the previous flight legs,” the report said. They turned back to the departure airport, in Port Harcourt, and landed the aircraft without further incident. Examination of the engine revealed improper installation of a fuel inlet fairing and a fractured secondary fuel inlet tube. Like the engines on the accident aircraft, this engine also had been overhauled by Millenium Engine Associates. The NCAA subsequently issued an order that effectively grounded all Dana Air aircraft with engines overhauled by Millenium until the engines were overhauled again by an NCAA-approved engine shop.

Based on the investigation, the AIB issued several safety recommendations. In part, the bureau said that Dana Air should improve its background checks of foreign pilots and require foreign pilots hired as captains to fly at least the first 100 hours with “competent senior first officers who are familiar with Nigerian airspace and routes.” The AIB also called on Pratt & Whitney to make compliance with SB 6452 mandatory and to redesign the procedures for installing manifold assemblies on JT8D engines to make them “foolproof to prevent incorrect installations.”

This article is based on Accident Investigation Bureau of Nigeria Aircraft Accident Report DANA/2012/06/03/F, “Report on the Accident to Dana Airlines Nigeria Limited Boeing MD-83 Aircraft With Registration 5N-RAM Which Occurred at Iju-Ishaga Area of Lagos State, Nigeria, on 3rd June 2012.”